The Power of Intergenerational Activism 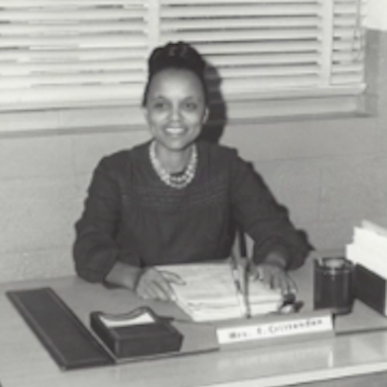 Mrs. Flora Crittenden is a remarkable woman who positively impacted her students and community throughout her lifetime. She worked as an educator, guidance counselor, and politician during the Civil Rights Movement. Her incredibly deep involvement in her community speaks to her determination to facilitate racial justice in every aspect of life. I reviewed an oral history interview from Mrs. Crittenden during my involvement with the Teachers in the Movement Project, and a major theme that arose in the discussion of her career is the importance of support systems. This yielded intergenerational progress that is evident in the lives of Mrs. Crittenden, her family members, and her students.

Mrs. Crittenden’s family shaped her view of education and ultimately led to her deep appreciation of teaching. She was born in Brooklyn, New York, and grew up in Newport News, Virginia where she lived with her grandmother. She resided in an educated household; her family supplied her with necessary reading material as well as mentally stimulating activities. Additionally, she had numerous role models in the form of her uncle and five aunts, all of whom were college-educated. Four of her aunts were teachers. This rearing environment provided Mrs. Crittenden with constant support and academic opportunities. Initially, Mrs. Crittenden thought she would “never be a teacher" because she witnessed her aunts’ overwhelming workload. Despite this negative perspective, Mrs. Crittenden found herself creating an imaginary classroom as a child. She would take attendance of her supposed students and even grade their assignments. It was apparent that teaching had infiltrated all aspects of her life. Her familial role models made pursuing this dream and attending college attainable.

The mentors she had were not limited to her relatives. While attending the only school that accepted Black students in her county in Newport News, Huntington High School, Mrs. Crittenden interacted with teachers who maintained high standards for her. This high school was established around 1920 with the intention of providing quality education to African American students, and in Mrs. Crittenden’s experience, it did exactly that.[1] Mrs. Crittenden specifically recalls the impact her high school biology and chemistry teacher, Mr. Hines, had on her. While in his class, she was assigned projects that she found uninteresting. She was determined not to complete her assignments; however, Mr. Hines pushed her to conduct the necessary research. Mrs. Crittenden believes that educators like him were the reason she attended college and excelled academically. Mr. Hines was one of the many resources Huntington High School afforded Mrs. Crittenden, and his impact in her life extended beyond his classroom. Years after she graduated, Mr. Hinesbecame the principal of George Washington Carver High School which is located in Newport News. He alone was responsible for the school’s opening and operations due to the lack of resources provided by the School Board. As a result, he recruited Mrs. Crittenden to help develop the school’s curriculum and hire faculty. Mr. Hines garnered her support prior to the school’s unveiling in 1949. He went to her home, and he said “Mrs. Crittenden, get dressed—we got to go make a school.” This simple statement coupled with his guidance radically affected Mrs. Crittenden’s life. It gave her the opportunity to invest in a school in a way that most teachers are unable to do.

Educating during the Civil Rights Movement

Flora Crittenden graduated from Virginia State College for Negroes, now known as Virginia State University, in 1945. This was and continues to be a historically black institution located in Petersburg, Virginia. In college, she studied physical education with a minor in biology. During her teaching career, she supplemented her education with a Master’s in Science from Indiana Univerisity Bloomington in 1959. Mrs. Crittenden’s daughter, Thursa Crittenden, described a discriminatory law known as the Dovell Act which influenced Mrs. Crittenden’s decision to attend Indiana University Bloomington for her studies. Thursa Crittenden indicated that the state of Virginia offered Black students a stipend to attend universities in other states in order to prevent non-white students from attending the University of Virginia. Despite the challenges she experienced, Mrs. Crittenden notes that the training she received from these institutions adequately prepared her for her teaching career in Newport News where she taught girls’ physical education and occasionally biology.

Even though the subject matter Mrs. Crittenden taught did not easily align with the ideas promoted by the Civil Rights Movement, Mrs. Crittenden made an effort to remind her students that they were valued, citizens. She wanted them to know that neither their age nor race made them inferior to anyone. Mrs. Crittenden worked predominantly with young women since “physical education classes were separated by gender but not the academic classes.” It was not until 1972 that all classes were required to be coeducational as a result of Title XI.[2] Therefore, the majority of Mrs. Crittenden’s students had to navigate a society that praised whiteness and masculinity. This challenging situaiton made the affirming messages Mrs. Crittenden taught increasingly necessary. Additionally, she encouraged her students to be an active member of their communities despite social norms. This approach was rooted in her belief that educational institutions have the ability to strengthen both families and nations by producing educated and thoughtful citizens. Mrs. Crittenden was determined to ingrain these ideals in her students. Her teaching style suggests that activism can occur in any environment. It is not limited to certain subject matter, locations, or age groups. She suggests that "it just so happened that [she] was a teacher” who used her career as a platform to promote Civil Rights. Mrs. Crittenden’s work suggests that activism is rooted in an understanding of the humanity of people.

During her thirty-year career in education, Mrs. Crittenden taught at George Washington Carver High School when it was segregated and integrated. The main difference she noted was simply the color of her students’ skin. She found that children were children regardless of their race or social class. Her approach to her students was not altered much by integration as she continued to care about the students she worked with. To Mrs. Crittenden, love is a necessary component of teaching as it creates connections with and fosters understanding between her and her students. Her love accomplished this through the ways she encouraged students to pursue higher education. She treated them as people deserving of respect, and she tried to prepare them for the future as best as she could. The latter was especially important during this period of constant change. According to Mrs. Crittenden, teachers tried to give students advice on how to work in a segregated society. They also taught students how to navigate a de-segregated world among other possible scenarios as it was unclear how the Civil Rights Movement would impact the current moment. Mrs. Crittenden did everything she could to make her students’ transitions to a changing society more successful.

Mrs. Crittenden sought opportunities to enact change in the lives of young people and community members beyond teaching. This led to her decision to become a guidance counselor. This new position allowed her to counsel students in a more personalized manner; she could tailor her approach to individual students rather than classrooms with multiple people. Mrs. Crittenden was invested in the lives of her students. Furthermore, she was able to engage directly with students and parents creating an environment that fostered student success. Thursa Crittenden recalled an experience in which a student received a scholarship to an excellent university, but he did not want to attend that institution. Mrs. Flora Crittenden knew the school would afford him numerous opportunities, so she traveled to the students’ homes to speak to his parents and compel him to accept the university’s offer. He ultimately decided to attend the university, and he attributes his success to Mrs. Crittenden’s persistence. This situation highlights Mrs. Crittenden’s deep desire to support her students.

The love and encouragement Mrs. Crittenden had for her students were mutual. After retiring from teaching, her students urged her to work alongside them in politics. They suggested that she run for City Council because they believed that she would excel in this new field. She followed their advice and served one term on the Newport News City Council from 1986-1990. Afterward, she represented the 95th District in the Virginia House of Delegates for over a decade between the years 1993 and 2004. She decided to pursue public service because of her desire to “know exactly what the issues were” in her community and how to make positive change. Mrs. Crittenden’s students supported her career change, and they actively sought to preserve her legacy. Their efforts were underscored in the renaming process of George Washington Carver High School, the school she helped establish with Mr. Hines. It is now Flora D. Crittenden Middle School, a magnet school for science, technology, engineering, and mathematics.[3] Her students advocated for the school’s name change which took place in 1996. They saw it as a fitting tribute to her impact on the community’s education system and their personal lives.

Although Mrs. Crittenden’s resume is quite impressive, she continues to highlight her love for her students as one of her greatest sources of joy. Her relationship with these individuals highlights the positive effects of supporting and empowering one another. She not only displayed leadership by the way she guided and respected her students, but she also exhibited humility by listening to their advice. These characteristics and relationships led to ample opportunities in which she served her community in meaningful ways.