Pushing the Boundaries of the Classroom: Reflecting on Mrs. Patricia Ramón’s Teaching Practices 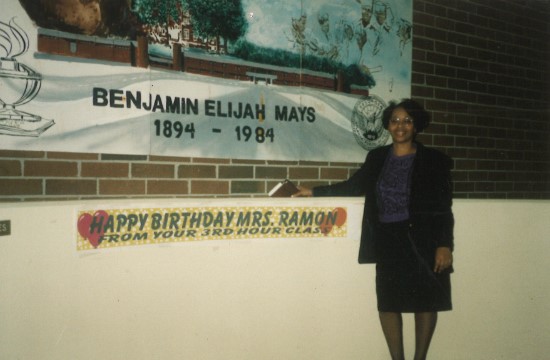 Hannah Malcolm is a fourth-year undergraduate student in the Youth and Social Innovation Program at UVA's School of Education and Human Development.

Mrs. Patricia Ramón was undeniably an influential and inspiring English teacher. Her many accolades and teacher awards evidence this.[1] As an undergraduate research assistant for the Teachers in the Movement (TIM) project this spring, I had the opportunity to speak with Mrs. Ramón to record an oral history account of her experiences growing up and pursuing a teaching career in Atlanta, Georgia. Through this experience, I learned why Mrs. Ramón is so deserving of her accolades and awards. She was a phenomenal teacher because of her intense empathy and dedication to her students. In her many years of teaching during and after the civil rights movement, Mrs. Ramón implemented practices that pushed against the boundaries of classroom rules to provide for her students.

Background
Mrs. Ramón remembers her days as a student in Atlanta as an enjoyable time in her life. She made good grades, her schools were within walking distance, and she had very supportive teachers. For example, her high school homeroom teacher ensured she had the correct schedule and had everything that she needed. Also, her homemaking teacher influenced her in teaching her how to sew, so much so that when she started working, she would buy patterns to make clothes for work. Mr. Woods, Mrs. Ramón's ninth-grade English teacher, influenced her so much that she decided to become an English teacher herself. This relationship would come full circle later in her career when Mr. Woods would become the principal of the school where Mrs. Ramón was teaching, Benjamin E. Mays High School. Therefore, whether it be influencing her to become a teacher herself, providing her with life skills, or simply assuring her that somebody was rooting for her success, Mrs. Ramón's teachers helped her navigate adolescence.

Mrs. Ramón grew up attending Ebenezer Baptist Church, the church where Dr. Martin Luther King, Jr.’s father, whom they called “Daddy King,” was a popular pastor. Mrs. King, Dr. King’s mother, directed the choir. Mrs. Ramón was a part of the choir, and she attended fellowship gatherings where she got to know Mrs. King very well. Mrs. Ramón personally knew Dr. King, Jr., and even babysat his children with her sister. Dr. King and Ebenezer Baptist Church impacted Mrs. Ramón as a teacher, as she would learn of everything that was going on in the civil rights movement in church on Sunday and take it with her back to the classroom on Monday. As a young person, she admittedly did not always agree with the non-violent approach that Dr. King preached, but, reflecting on the time now, she recognized that nonviolence may have been the best way to minimize the confusion that people were experiencing.

Mrs. Ramón received her bachelor’s degree in English Education at Clark College, a predominantly Black institution, and her master’s degree at Georgia State University, a predominantly white institution. While she encountered some professors who treated her poorly, she still succeeded with high achievement due to her hard work and perseverance. By the time she was attending Georgia State University, Mrs. Ramón had already started teaching in the classroom. She received her last degree, an Education Specialist degree, in 1995 after being awarded a Reader's Digest grant. Mrs. Ramón was well educated at the universities where she studied, but she importantly notes that she did not actually learn how to teach until she was in the classroom.

When she first started teaching, Mrs. Ramón was only four years older than some students and physically very small. Some of the students may not have even realized she was a teacher when she first started. These circumstances presented a challenge for Mrs. Ramón in affirming that she was in charge of the classroom: “Yes, I was young, but I was firm.”[2] As Mrs. Ramón navigated this process, she credits a teacher advisor for offering her help and advice on how to relate to her students. She assured her to be patient with her students and handle matters in private because those students may be experiencing turmoil in other aspects of their lives and acting out in class as a response. Additionally, she helped Mrs. Ramón navigate how to meet individual student needs since they did not all learn the same way. This teacher advisor was a mentor for Mrs. Ramón in her early years of teaching. As Mrs. Ramón established herself in her classroom and within the schools she worked in, she created an environment where her students felt heard and understood.

Civil Rights in the Classroom
Walking into Mrs. Ramón’s classroom, a student would be on time and prepared, and they would be entering a well-decorated, lively classroom. Her teaching style was dynamic, as sometimes she would lecture, sometimes students would work in teams or groups, and other times the class would engage in discussion. Being in Atlanta in the late 1960s, Mrs. Ramón’s students were keenly aware of the Black activists who were out marching, preaching, and teaching about equal opportunity in Atlanta and elsewhere. Naturally, the Black students' curiosity provoked questions about why they could not be doing the same things that white students were. She recounts the frustrations of her male students when they would come to class and tell her that the police pulled them over and searched them for no reason. Her students were very aware that this was not happening to everybody.

Mrs. Ramón and her classroom served as a refuge for many of these students. In some cases, Mrs. Ramón broke school rules when students would come to her. Despite her coworkers' warnings that she would get fired, Mrs. Ramón would sometimes pray with her students that came to her. One day, a policeman came onto her school floor and entered a classroom to handcuff a young man. They pushed him out in the hallway in front of the other students. Mrs. Ramón describes the event as petrifying, inappropriate, and disrespectful. The young student was accused of stealing from where he worked. At the same time, Mrs. Ramón recalls young white boys getting the chance to turn themselves in without repercussions for stealing. For the young Black student, an accusation alone led to handcuffs in the school hallway. Mrs. Ramón felt that “it was just impressed on my heart to talk to them, and I would pray with them.”[3]

Mrs. Ramón was not only there for her students when they came to her, but she was proactive in making sure that her students knew about Black authors and publishers in her literature classes. Mrs. Ramón took it upon herself to teach Black literature because, otherwise, her students may not be exposed to it until college, if at all. Many of her textbooks only contained one Black author in them. Some of the authors she included were Maya Angelou, Richard Wright, Alice Walker, and authors from the Harlem Renaissance. Mrs. Ramón’s efforts to expose her students to Black writers paid off, as evidenced by her former student, Tayari Jones’ success. In a letter to Mrs. Ramón, Tayari Jones writes, “I want to thank YOU for being so kind and encouraging to me when I was just a young girl who loved to write, but had no idea that I could BE a writer.”[4] Tayari Jones is the author of the novel Silver Sparrow and three other books.

Mrs. Ramón's experiences growing up and teaching in Atlanta paint a fuller picture of what it meant to be a teacher during the civil rights movement. Serving as a teacher, role model, and leader for youth, Mrs. Ramón fulfilled many roles. Mrs. Ramón pushed against the boundaries of what she was supposed to teach in school to provide her students with the guidance and support they needed. While they may not have been written into the curriculum, these practices were pivotal to Mrs. Ramón’s classroom. Mrs. Ramón inspired the youth she worked with and those around her, and she continues to do so today as she practices empathy and kindness to encourage those around her to “do what we can to make the world a better place.”[5]

Special thank you to Mrs. Patricia Ramón for sharing her experiences and wisdom with us!